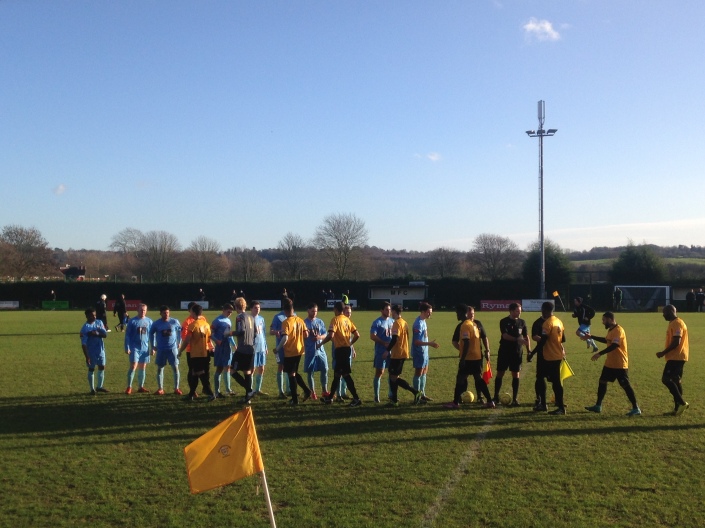 Brentwood Town claimed their first win of 2016 to keep their survival bid in the Ryman Premier alive, after a 3-1 away victory at Mersham.

The home side took the lead early in the second half, as Antone Douglas scored from close range.

Brentwood responded with the leveller shortly after, as Lewis Knight nodded in for his first goal for the club.

‘The Blues’ then got themselves infront, as second half substitute Leon Gordon put his strike away from close range.

The visitors sealed the points in injury time, as Tom Richardson slotted in to give Brentwood their first win since November.

Mike Flanagan names an unchanged starting 11 that gained a 1-1 home draw against Burgess Hill Town last weekend, with the added boost of Leon Gordon as he returned from injury to make the bench.

Brentwood had the first meaningful shot of the match 22 minutes in, after good work from Andrew Freeman in a tight situation out wide – he then lifted a deep ball into the box for Robbie Rees’ shot on the volley to be held by Josh Smith.

‘The Blues’ had another chance from a set piece this time, as Mitch Hahn’s corner was whipped in for Captain Martyn Stokes to head just wide, as it clipped the post.

Mersham showed their attacking threat, as Captain Fabio Saraiva slotted it into Tom Kavanagh whose snap shot was straight at Ollie Bowles.

In the second half, the home side took the lead 58 minutes in as Saraiva’s in swinging free-kick was not cleared from Brentwood and was tucked in by Douglas at the far post.

Brentwood responded with a set piece of their own, as Hahn’s free-kick was whipped in goalwards and diverted by Knight to evade the keeper Smith to equalise.

‘The Blues’ went on to take the lead shortly after, as Richardson wriggled into the box and managed to find Rees who flicked it to substitute Gordon coming in from the right to fire in.

The away side almost extended their advantage, as Richardson again caused havoc out wide and played in Freeman on the overlap to find Rees whose shot went narrowly wide.

Mersham nearly scored with a couples of minutes remaining of normal time, as Savaiva’s whipped in ball was headed just wide by substitute Ellis Brown.

Brentwood then secured the three points on the stroke of 90 minutes, from a long ball by Bowles which was flicked on to put in Richardson who coolly finish from a tight angle to push the away side up 21st.

Follow the link for a listen to Brentwood Town Manager Mike Flanagan: 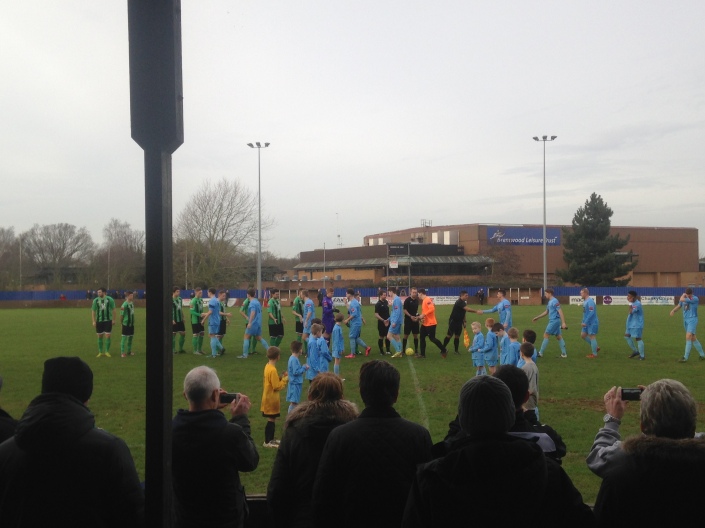 Brentwood Town were denied their first win since November by a late equaliser from Burgess Hill Town’s Joe Keehan in their 1-1 draw at the Brentwood Arena.

Robbie Rees gave ‘The Blues’ the lead early in the second half, with his diving header in Brentwood’s first home game of 2016.

Burgess Hill got a last minute leveller from a set piece, to snatch a point and stun the home side and deny them what would have been a vital win in their survival bid.

Mike Flanagan made two changes to his side that grabbed an away draw against local rivals Billericay, as Captain Martyn Stokes returned from injury in place of Connor Hogan and Robbie Rees was chosen ahead of Petrit Elbi.

Burgess Hill had the first shot of the match 11 minutes in, as Lee Harding’s strike from just outside the box was saved by Ollie Bowles and collected at the second attempt.

In the second half, the visitors had a great chance to lead as Captain Darren Budd had a shot from close range, which was stopped by Bowles.

Brentwood lost the ball from the broken down corner, which worked its way to Sam Gargan on the edge of the box, whose shot was kept out by a great save from Bowles at full stretch.

The hosts broke the deadlock, just before the hour mark after good work from Brentwood, Tom Richardson managed to find a yard and whipped in a cross for Rees to head home.

Burgess Hill went straight in search of the leveller as Harding’s shot was parried for a corner by Bowles. From the resulting corner, Dan Pearce whipped in a deep cross for Harding to meet again at the far post, which Bowles had to help onto the bar and Ryan O’Rawe finally cleared the danger.

The away side nearly equalised, as the ball broke to Budd and his vicious strike had to be turned over the bar again by Bowles to deny the visitors.

Brentwood hit Burgess Hill on the counter-attack, with great work from substitute Petrit Elbi and Richardson whose shot was well held by Josh James.

The visitors got a late equaliser in injury time, as Pearce’s corner was put in to the back post for first half substitute Joe Keehan to nod in – to deny the host all three points.

Billericay Town extended their unbeaten league run to 15 games, after a 1-1 draw against local strugglers Brentwood Town at New Lodge.

Brentwood gained their first and vital point of the New Year courtesy of Captain Ryan O’Rawe in the first half to the local neighbours the lead.

Billericay finally broke down the Brentwood defence in the second half, through Teddy Nesbitt to continue their playoff push.

Mike Flanagan brought in three new signings for Brentwood who all featured, as Ollie Bowles returned in between the sticks on loan from Concord Rangers. Lewis Knight cames in to sure up the defence from Chatham Town and Petrit Elbi from Aveley to strengthen ‘The Blues’ at the other end.

Craig Edwards had an introduction of his own, as he brought in Jordan Cox from Braintree Town to add to Billericay’s strike force.

Billericay almost broke the deadlock 15 minutes in, as Connor Hubble’s strike from outside the box was heading goalwards but for Ryan O’Rawe to direct it over the bar.

The home side should have taken the lead 25 minutes in, as Billericay’s new signing Cox was put through on goal but his shot on the edge of the box went just wide.

Brentwood took the lead on the half hour mark, as Mitch Hahn’s free kick came back off the post and into the path of O’Rawe who tapped in the rebound from close range.

In the second half, Billericay equalised on the hour mark, as Quentin Monville did well to keep the ball in and whipped a deep ball into the box – which was not dealt with by Bowles to fall to Nesbitt at the far post to fire home.

Brentwood threatened through Elbi’s flick on for Tom Richardson, who burst goal bound cut back inside for his shot which went wide.

Billericay could have snatched the three points at the death in injury time, as substitute Glen Poole’s corner went through everyone in the six-yard box and Brentwood cleared – to hold on for an important point. 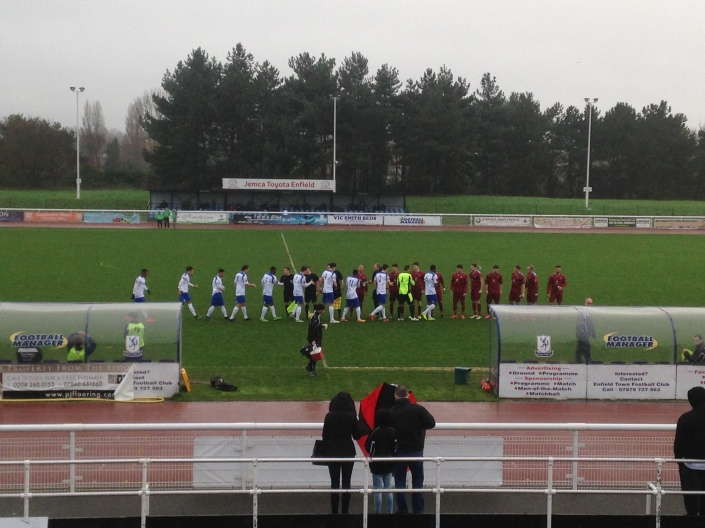 A late Claudiu Vilcu goal dampened Brentwood Town’s New Year festivities after a 2-1 away defeat to Enfield Town in Mike Flanagan’s first game in charge of ‘The Blues’.

Brentwood slip to eight points off safety despite having four games in hand and remain without a win since early November.

Bobby Devyne grabbed a first-half opener with his free-kick, which went straight in to set Enfield on their way.

‘The Blues’ levelled the match in the second half through the return of Tom Richardson, as his close range strike gave the away side holding a vital point.

But on the approach to injury-time Vilcu headed home to snatch yet another late victory to continue their hopes of possible promotion.

Tom Richardson had an early shot for the visitors, as he checked back to evade the defender inside the box but his shot was straight at Nathan Mcdonald.

Enfield had a great chance 15 minutes in as Evans Kouassi burst down the left flank into space, his cross into the box broke for Devyne whose shot came off the crossbar and was eventually cleared by Brentwood.

Corey Whitely was put through for Enfield shortly after, breaking through the Brentwood defence but his snap shot went wide of the target.

Brentwood crafted an opportunity for the lead, as Richardson did good work out wide and whipped a ball in for Shad Ngandu whose free header went over.

Richardson turned his man once again to put Brentwood on the attack, he then laid the ball to Ngandu whose shot was parried over the bar by Mcdonald.

Ngandu gave away a needless free-kick for Brentwood just inside their own half, which resulted in Enfield taking the lead as Devyne lifted the ball into the box which caused confusion and found its way in.

Brentwood almost equalised five minutes into the second half, as Mitch Hahn whipped in his first time cross which was overhit but came back off the crossbar.

Enfield nearly doubled their lead, as Whitely’s strike from outside the box was palmed into the path of Devyne whose heavy touch was clawed off the line by Plummer.

Brentwood equalised 65 minutes in, as Ngandu was able to cut the ball back across the box after beating the defender for Richardson to tuck in from close range.

Devyne got himself through on goal shortly after, and had just Plummer to beat but his poked shot went just wide of the post.

Enfield were pressing for the winner and Harry Ottoway nearly grabbed it for the home side but his shot went wide of Plummer’s near post.

The hosts broke Brentwood’s valiant defence on the brink of injury time, after a half cleared corner was clipped to the far post to be headed home by Vilcu to snatch the three points.